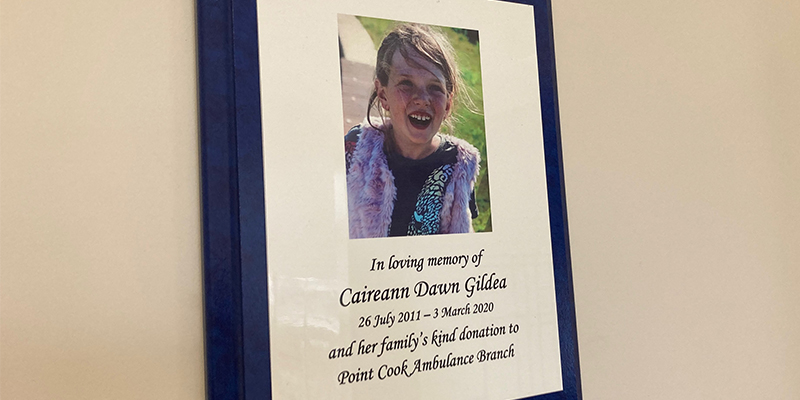 Ambulance Victoria (AV) paramedics have graciously welcomed a big-hearted community donation to the Point Cook branch, thanks to a local family.

In memory of their beautiful daughter Caireann, who passed away at just eight-years-old, the Gildea family has donated $4,000 to their local paramedics, which is planned to go towards training and simulation equipment for the branch and upgrading their paediatric training capabilities.

“It is actually the first time a community donation has been made to the Point Cook branch, so it’s a big part of our almost-14-year history in the area.”

The grade three student, daughter of Point Cook residents Kathleen and Neal Gildea, died after suffering from a ruptured Arteriovenous Malformation (AVM) in her brainstem on 1 March 2020.

“It came completely out of the blue,” Kathleen said.

“The day before, she had won a 200-metre race at Little Athletics, and then the next day she was struggling to breathe. Neal told me to immediately call Triple Zero (000) and he was advised to commence cardiopulmonary resuscitation (CPR).”

AV paramedics arrived on scene to find Caireann in cardiac arrest, and took over her medical management from Neal, who had done an incredible job with compressions.

“It was a complex case, but Caireann was resuscitated on scene and transported to The Royal Children’s Hospital, however she was unable to recover and passed away a couple of days later,” Blixa said.

After she was admitted to hospital and several tests and brain scans were conducted, doctors advised Kathleen and Neal that Caireann had experienced a rare internal bleed in her brain.

“Where the AVM ruptured affected her heartrate and breathing,” Kathleen said.

“Caireann remained on life support until 3 March 2020 to give extended family from Ireland and New Zealand time to say their goodbyes in person.” 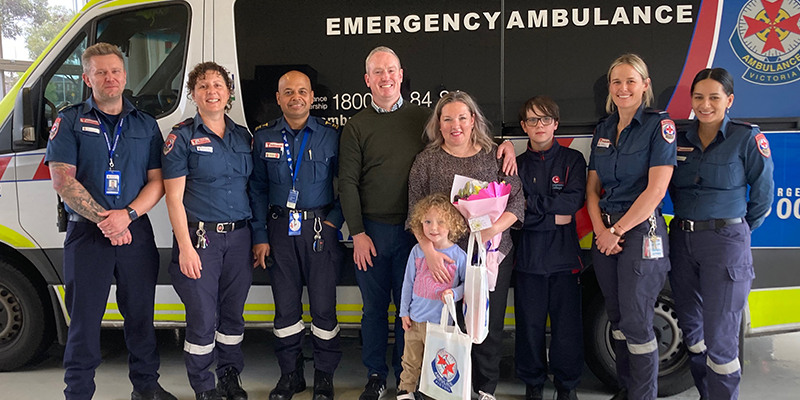 It was during this time the family also spoke about organ donation.

Both Caireann’s kidneys were donated, one to a man and another to a woman who had both been on dialysis, and a teenage boy received her liver.

Two of her heart valves are also being stored for possible future transplants.

After Caireann’s passing, the Gildea family set up a GoFundMe campaign to raise money for organisations that supported them and their daughter.

“Caireann’s school has been so supportive of our family, that we felt we had to give back and thank them, as they are always trying to think of innovative ways that our daughter can be remembered and keep her memory alive,” Kathleen said.

“We also love talking about her, and remember her everyday; on 26 July, 2022 Caireann would have turned 11, so as a family, we made pancakes – one of her favourites – and had a birthday cake with pink candles,” she said.

Kathleen said these special dates were good to recognise; they were keeping Caireann and her story alive.

“Meeting Caireann’s family has been such a great lift for the team – something like this will be talked about forever,” Blixa said.