The report shows 37 per cent of people who were seen to collapse, whose heart was in the most treatable cardiac rhythm (ie able to be shocked by a defibrillator) and then received resuscitation by emergency services in 2016-17 survived. In greater Melbourne, 38 per cent of these patients survived compared to only 30 per cent in London. 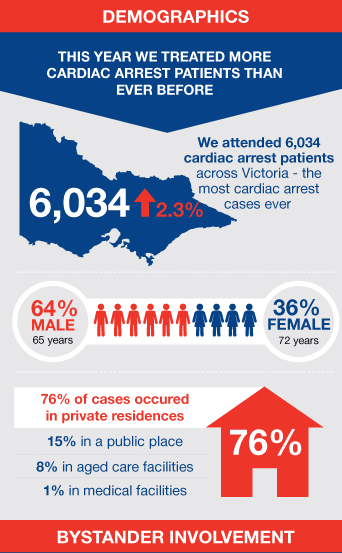 It also found more bystanders than ever were stepping in to save lives. Members of the public defibrillated a record 80 people in cardiac arrest and more than 60 per cent of bystanders who witnessed someone collapsed in cardiac arrest gave cardiopulmonary resuscitation (CPR), up from 42 per cent a decade ago.

Paramedics are also responding to cardiac arrest cases faster than ever before, with a median response time of 7.7 minutes.

“If you see someone in cardiac arrest, call Triple Zero (000) for an ambulance and start CPR. The trained Triple Zero call-taker will provide instructions on how to do this.’’

Associate Professor Walker said it was estimated less than 20 per cent of defibrillators in the community were registered with Ambulance Victoria.

“We’re calling on defibrillator owners to register their location with Ambulance Victoria to make defibrillators available to people who need them, when they need them,’’ he said.

“Your defibrillator could save a life. Register it with Ambulance Victoria today at ambulance.vic.gov.au/register.’’ 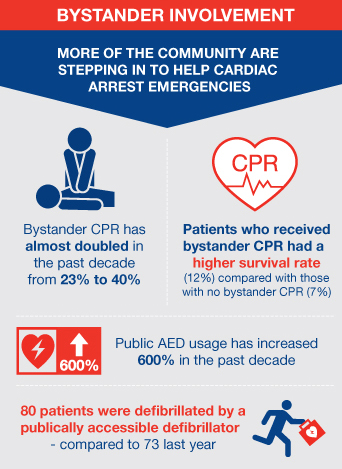 “The VACAR Annual Report paints a comprehensive picture of cardiac arrest care and outcomes in Victoria and is internationally recognised,’’ Dr Smith said.

“We are one of the few out-of-hospital cardiac arrest registries to routinely follow up on survivors’ quality of life. The report shows 77 per cent of patients who were working prior to their cardiac arrest returned to work within a year.’’ 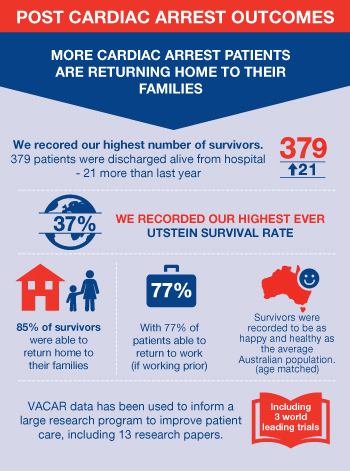