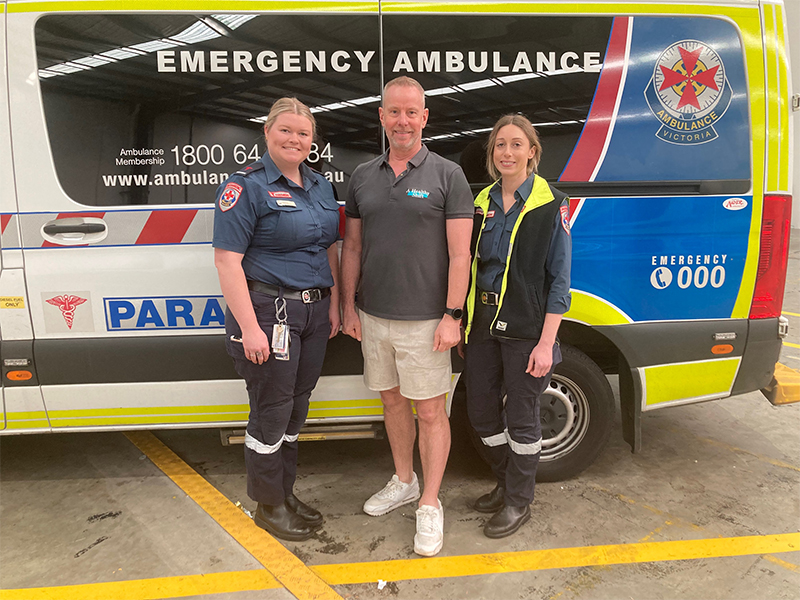 A Moonee Ponds father who experienced stroke symptoms while taking a walk with his partner is using National Stroke Week to encourage other survivors not to give up.

In June 2020, Roger Sutherland was telling his partner a story about his daughter when he started to feel unwell and collapsed on the road.

“We were taking an afternoon walk and before I knew it, I buckled on the nature strip, and experienced a left-sided facial droop, numbness, tingling, my words were slurred and I lost the ability to move my hand,” Roger said.

The certified nutritionist was having a transient ischaemic attack (TIA) that happens when blood supply to the brain is temporarily blocked.

The signs of a TIA are the same as stroke, but they disappear within a short time and are often only present for a few minutes.

Earlier that day, Roger had done a weight session at the gym.

He was taken to the Royal Melbourne Hospital where the TIA was confirmed and investigated.

In June this year, Roger marked two years since surviving his TIA, which puts him at risk of future strokes.

“My doctor was horrified I had this attack; and the neurologists attributed the cause of the TIA to incredibly high stress-levels,” Roger said.

“I was lucky I haven’t suffered any deficits as a result, but this episode has totally overhauled my mentality and changed how I worked.”

Roger was a shift-worker for almost four decades and after taking five months off work after the TIA, decided to change course and start coaching other shift-workers in health and nutrition.

“I coach other shift-workers in health and well-being, purely based on my experience with stress, which I have personally found is so important to get on top and raise awareness of,” he said.

During National Stroke Week, Roger is encouraging people to become familiar with the common signs of a TIA which mimic a stroke. These include Facial droop, inability to lift Arms, slurred Speech and Time – the F.A.S.T signs.

“Stroke and TIAs don’t discriminate, and as I found out, these episodes can happen to anyone at any age, so it’s important to learn the signs so you can seek treatment immediately,” he said.

“Rhiannon and Shelley were both so empathetic and caring; I know this is expected from AV paramedics but they were exactly that – I’m eternally grateful to them, not forgetting the MSU crew who I am also extremely grateful for as well.”