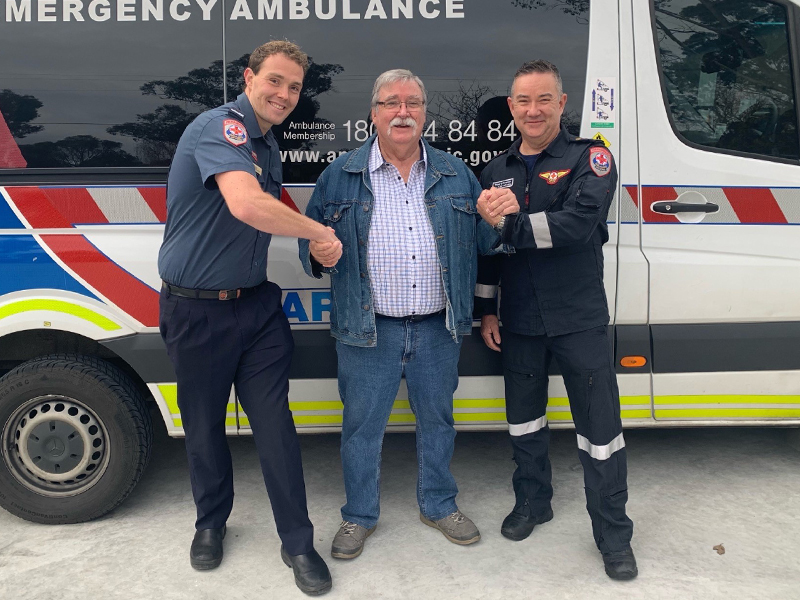 A Kilsyth South man who suffered an horrific motorbike accident before going into cardiac arrest has thanked the local bystander and Ambulance Victoria (AV) paramedics for saving his life more than three years ago.

Brian Wiltshire, 69, was on a motorcycle ride from Kilsyth with more than 15 others in December 2018.

His wife Robyn was travelling with him on his beloved Harley Davidson through Wandin North when they lost control at low speed and were thrown from the bike.

“As an experienced motorbike rider, and organiser of group tours in the United States on motorbikes, it’s taken some time for me to learn how to live with what happened,” the father-of-two said.

“It was a pure accident; it was an 80mk/hr road and I was travelling 40km/hr, yet on that day I stopped breathing, suffered two collapsed lungs, tore the socket in my shoulder, broke ten bones in my face, had bleeds on my brain and damaged part of my hip and lower back.”

Wandin North local Deb Harper said when she saw Brian lying on the road and heard his distressed wife, she immediately went to see if she could help.

“Within a few minutes of the accident, I took over the 000 call and when I told the call-taker he wasn’t breathing, I was immediately instructed to start cardiopulmonary resuscitation (CPR),” Deb said.

Brian was unresponsive and had no pulse, so Deb continued CPR until the first paramedics arrived on scene, including Advanced Life Support (ALS) paramedic Ryan Weston.

“Pre-hospital care in Victoria is world class, but it all starts when a bystander steps in and starts compressions. While bystanders alone will never replace an ambulance service, equipping people with skills to start the chain of survival; starting chest compressions or CPR and using an automated external defibrillator (AED) does save lives,” he said.

“Anyone can save a life in three simple steps.  Call, Push, Shock: Call Triple Zero (000), Push Hard, Push Fast on the middle of the chest, shock using an AED,” he said.

Brian was flown by an Air Ambulance Victoria helicopter to the Royal Melbourne Hospital.

“I had a seven-hour operation on my ribs, was in intensive care for 10 days and only remember the last three days of my three week hospital stay,” Brian said.

“People who saw me on the day of my accident can’t believe how I came out of it – it had a really big effect on people, so I am thankful that lots of things worked in my favour and am so grateful for everyone’s help on the day; especially Deb’s – I’m a really lucky guy.”

Deb said Brian’s case was the third time she’d needed to put her CPR skills to the test, and was grateful that CPR training was a requirement of her job in education for the last 40 years.

“It was such a relief to find out Brian was OK – I had seen a slight improvement in his health when it came time for Brian to be airlifted to hospital, but I still knew he was a long way off being well,” she said.