Kathleen Osborne was just 26 weeks into a textbook first pregnancy with no complications when the unthinkable happened – her baby daughter decided it was time to come into the world.

Kindergarten teacher Kathleen and her partner, Robert Chmielinski, welcomed little Ziggy into the world on the loungeroom floor of their farm property on 31 December 2020.

The delivery was totally unexpected, especially since the 33-year-old had seen her obstetrician the day before the birth and had passed all the checks with flying colours.

Advanced Life Support (ALS) paramedics Joshua Newland and Kaela Hughes responded to a notification of a patient with abdominal pain.

“On the way to the job, we got an update to say that the patient was pregnant – but there was no mention of an imminent delivery,” Kaela said.

Joshua said that after arriving at the scene, they discovered Kathleen’s waters had broken.

“I immediately asked Kaela to call for the Mobile Intensive Care Ambulance (MICA) paramedics, who would assist us with the postnatal care of the baby,” he said.

Joshua and Kaela brought Kathleen into the loungeroom, and Ziggy arrived at 3.45am 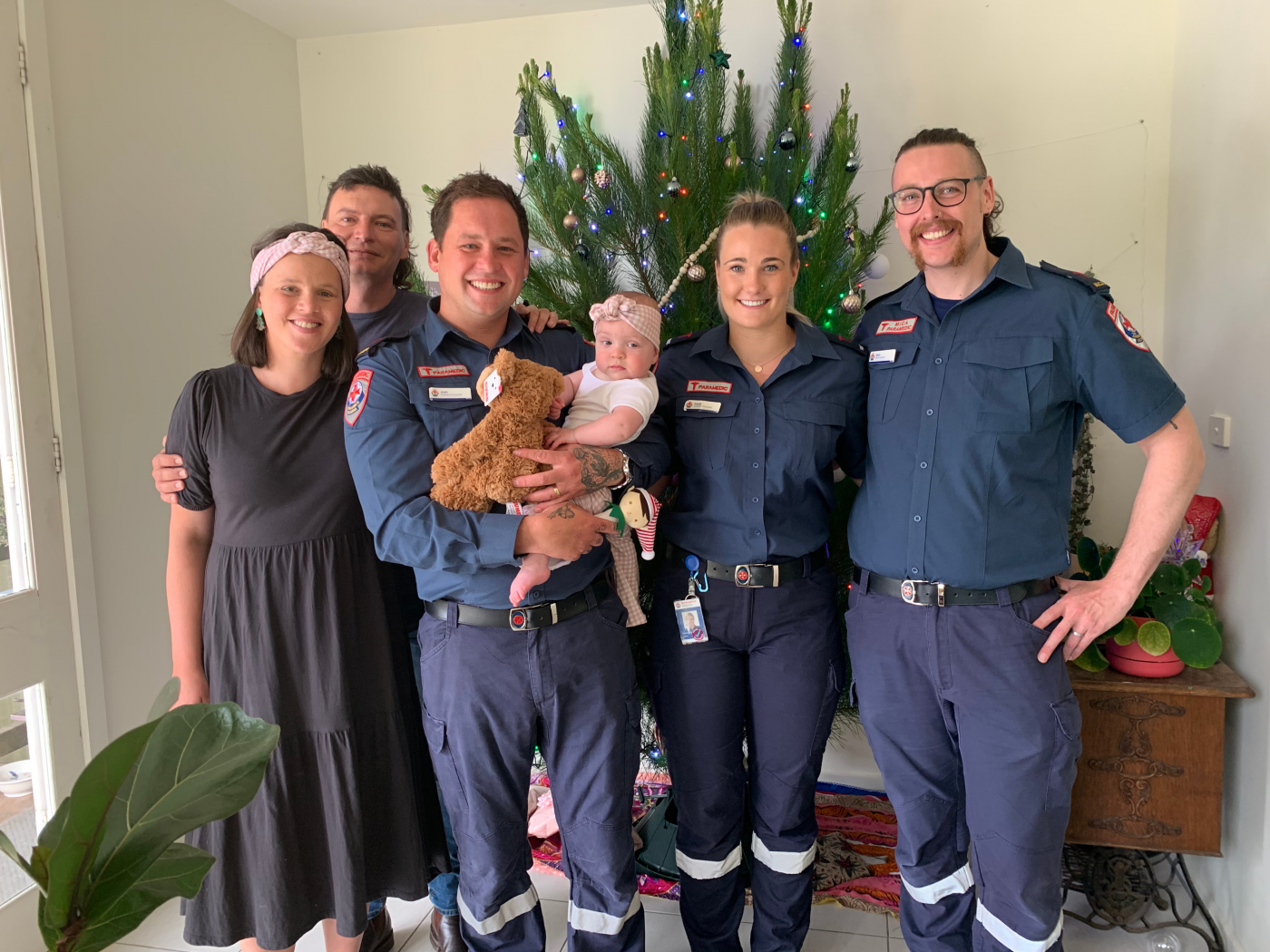 All smiles with baby Ziggy and parents Kathleen and Robert along with paramedics Joshua, Kaela, and Michael.

Ziggy was immediately wrapped to keep warm and, because her heart rate was low, was placed on a ventilator to increase her respiratory rate before MICA paramedic Michael Walker arrived.

“Being called to births as a MICA paramedic isn’t out of the ordinary but, thankfully, 99 per cent of the time the births are very routine,” Michael said.

“Attending a delivery of a baby that is 26 weeks gestation is really, really rare and probably a once-in-a-career sort of case.”

Ziggy was taken to Geelong Hospital, and weighed just 968 grams – less than a litre of milk. A few hours after birth, she was transferred to the Mercy Hospital where she spent three months in the neonatal intensive care unit.

When Ziggy’s health deteriorated 10 days later, she was taken by the Paediatric Infant Perinatal Emergency Retrieval (PIPER) team to the Royal Children’s Hospital for observation.

She returned to the Mercy Hospital five days later and on 27 March 2021 was transferred back to Geelong Hospital after nearly 90 days at the Mercy Hospital. Ziggy spent another 10 days in the special care nursery before she was finally able to home – approximately the time she would have been born if delivered at full term.

For the first time since her birth, Ziggy and her family were reunited with the paramedics who helped care for her during her first few minutes of life.

Joshua said despite the challenges of the case, it had been the most rewarding of his four years with AV.

“Almost one year on, to see that Ziggy was smiling and laughing and hitting all her milestones, was absolutely amazing and hopefully she goes on to lead a full life,” Joshua said.

“It’s a case that I will never forget.”

Michael said Ziggy’s story was a timely reminder of why it is so important to save Triple Zero (000) for emergencies.

“Calling 000 when you don’t need an emergency response takes AV away from life-threatening emergencies – like this one,” he said.

“If the right resources weren’t available for Ziggy, we may not have had such a successful outcome.”

The family is excited to share their first Christmas together and will keep the celebrations going as Ziggy turns one on New Year’s Eve.

“We are so grateful for the work of the paramedics, they are our heroes and are amazing people,” Kathleen said.

“Even though it was such a stressful situation, all the paramedics knew exactly what to do and the crews remained exceptionally calm.”

Robert said the family would be forever grateful to the paramedics.

“They save lives on a daily basis, that’s what they do for a living,” he said.

“But on that day they gave us life – it’s incredible.”

If it is non-life-threatening, GPs and pharmacists can provide timely non-urgent care.