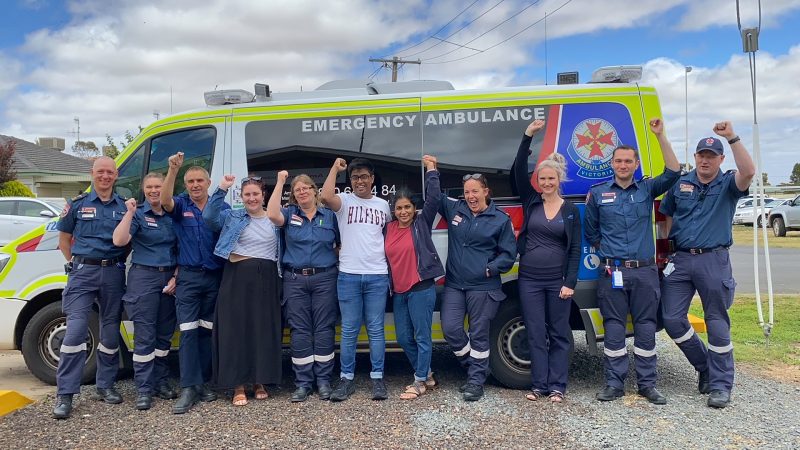 14-year-old Praneel Kumar (white shirt) together with paramedics and Ambulance Community Officers who treated him when he went into a sudden cardiac arrest in school last year.

A Kaniva boy who suffered a cardiac arrest at his school at age 13 has reunited with school staff, Ambulance Victoria (AV) paramedics, and AV’s Ambulance Community Officers (ACOs) who saved his life one year ago.

Praneel Kumar was running into his Year 7 school classroom just after midday on 2 December 2020 when he collapsed, hitting his face on a nearby desk.

First on scene was a Kaniva College staff member and Kaniva ACO Leonie Shurdington, who was alerted to Praneel’s medical episode by a fellow student.  Stacey Wallis-Rabone, a second off-duty ACO who was not on campus when alerted to the case, also responded.

“ACOs Leonie and Stacey, alongside several of the Kaniva College staff worked collaboratively to manage the scene,” Tristan said.

Praneel’s mum Rita Kumar described the frantic moment when she received the call that her son had suddenly collapsed in school.

ACO teams from Kaniva and Nhill, as well as AV paramedics, arrived shortly after Praneel went into cardiac arrest.

Praneel was unresponsive and had no pulse, so CPR was continued by the Kaniva ACO team, in conjunction with several shocks administered by the AED, successfully restarting Praneel’s heart.

Tristan said that early CPR and defibrillation are critical steps that help save the lives of people in sudden cardiac arrest.

“Anyone can save a life in three simple steps. Call, Push, Shock: Call Triple Zero (000), Push Hard, Push Fast on the middle of the chest, shock using an AED,” he said.

“AV really commends our off-duty ACO colleagues who swung into action, and the Kaniva College staff members who quickly recognised that CPR needed to be done and immediately assisted with effective chest compressions.” 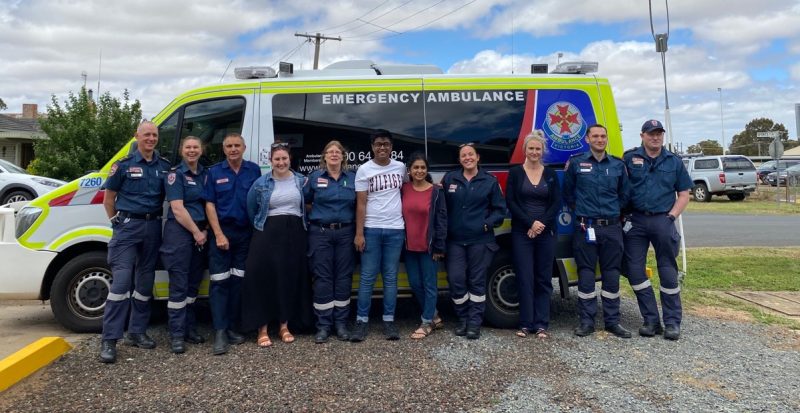 Praneel Kumar is thankful to the school’s staff and Ambulance Victoria for saving his life.

Pre-hospital care in Victoria is world class, but it all starts when a bystander steps in and starts compressions. Once someone starts CPR, the chances of survival for a cardiac arrest double.

“It was an absolute shock when the school called me to tell me Praneel had collapsed,” Praneel’s mum Rita Kumar said.

“Praneel had no pre-existing heart conditions before his cardiac arrest, and we have no family history of heart issues, so this came from out of the blue.”

Monica Feder, who has been an ACO in Kaniva for nearly 12 years and the Kaniva ACO Team Leader for approximately six, has also been celebrating the wonderful efforts of the first responders who attended Praneel’s case.