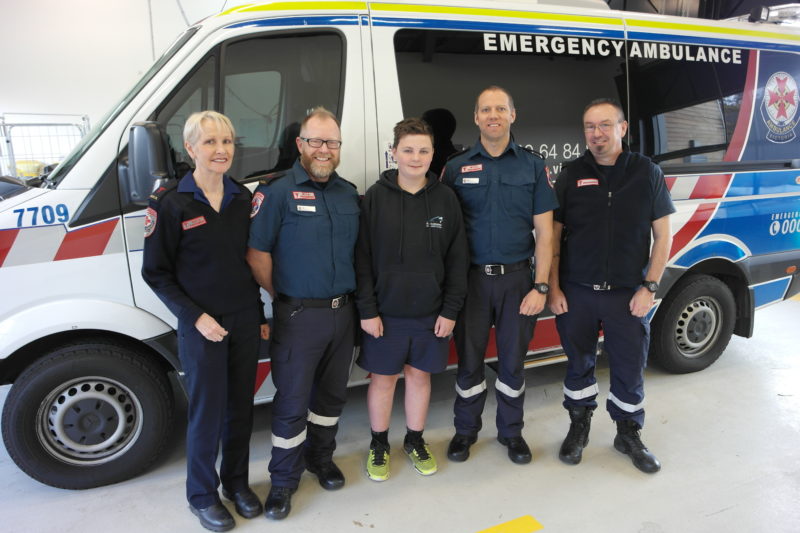 A Bendigo teenager critically injured in a road accident almost two years ago has reunited with the paramedics who came to his aid.

Sean Bell was just 12 when he was run over by a car while out riding his bike with his brother.

Sean fell into the path of a car travelling 60kmh and suffered a fractured skull, collarbone and pelvis, shattered leg, dislocated knee and serious abrasions.

“He was very unwell we arrived,” paramedic Roger Dark said.

“He was being tended to by the bystanders who did a fabulous job but he was very sick and had a lot of serious injuries.”

The keen sportsman was back playing football this year and will play cricket when the season begins.

For his parents, Claire and Cameron, the opportunity to thank paramedics Roger Dark, Mal Whitehead, Jan Sutton and Sean Penno was important.

“For us it’s absolutely paramount to come down here and do this and see the guys.

“On the day you don’t even know who is there at the time, so this is just overwhelming and a fantastic and big opportunity to say thanks.”

Paramedic Mal Whitehead said their role in Sean’s recovery was important but a small part of the overall journey.

“It’s hard to describe how good it is to see Sean this way and to see his parents being as grateful as they are,” Mal said. “

It’s not often paramedics get to catch up with the patients they treat and transport, so Mr Dark said it was gratifying to meet with the Bell family.

“It’s incredibly rewarding to see the fruits of our labours and Sean’s just made such a wonderful comeback,” he said.

“We don’t do this job for ‘thanks’, we do it because we love it, but when people do reach out it’s fabulous.”